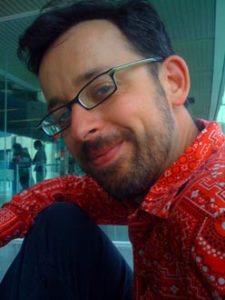 Dana Sperry is digital media artist whose work spans multiple formats and mediums. His recent work explores states of loneliness and isolation resulting from experiences that convey insignificance within a modern post-industrial society. Each piece considers different aspects of contemporary remoteness. In addition to exploring ideas of loneliness, Sperry is fascinated by the inevitable distortion, and simplification of value structures and renderings of past realities within a culture. has been exhibited/screened widely including New York, Chicago, Miami, Paris, Moscow, Amsterdam, Brazil, and India.

Sperry received a BA in philosophy as well as a BFA in studio art from Southern Methodist University. After studying at the Art Insititute of Chicago, He received an MFA from Indiana University.