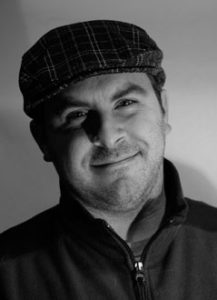 Joseph D’Uva Jr. was born in Ossining, New York in 1974. Soon after his birth, the family moved to New Port Richey, Florida to pursue a small business venture. New York was always considered home—they would spend the school year in New Port Richey and each summer in Ossining. This city holds much importance for Joseph, as it is where his grandparents settled after immigrating from Sassinoro, Benevento, Italy in the 1930s. Through the years, extended family made Ossining their home, and the two towns have been recognized as sister cities. During his childhood, Joseph would excel in art, mathematics, and sports (particularly soccer and skateboarding). In 1996, Joseph received his Bachelor’s degree, from The School of the Art Institute of Chicago. From there he attended the Tamarind Institute, where he completed the Professional Printer Training Program in 1997. He received his Master of Fine Arts degree in Printmaking from the University of Iowa in 2000. He has held full-time faculty positions at Bowling Green State University, Lawrence University, the University of Southern Indiana, and Youngstown State University. D’Uva’s work is generated from notions of childhood, memory, Pop culture, consumerism, and Americana. His work has been exhibited nationally and internationally solo, juried, and invitational group exhibitions.