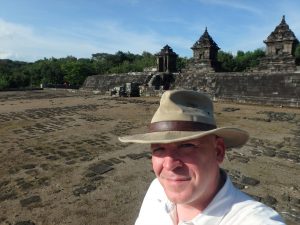 Dr. Farris’s recent research has focused on the artistic and architectural products of cultural exchange between Asia and the West from the 17th through the early 20th centuries. His published work has dwelt on the environments of the China trade in the 18th, 19th, and early 20th centuries, but he has cultivated a thorough knowledge of arts of East and Southeast while building on a firm knowledge of the Western tradition. Before coming to Youngstown State University, Farris lived and taught in Hong Kong for seven years.  Institutions where Farris previously taught include Washington University in St. Louis, Pennsylvania State University, and SCAD, among others.  He also has had previous work experience as a surveyor in a state historic preservation office and as an archaeologist at Thomas Jefferson’s Monticello. Some of his further interests include the history of architecture broadly, arts of tourism and travel, landscape and topographic art, the relation of gardens and art, and the history of ceramics, metal glass. He teaches courses in both Western and Asian art at YSU. His recent special topics seminar offerings have included “Art and the Garden” and “Arts for the Table.”