FACE by Eunsu Kang and collaborators 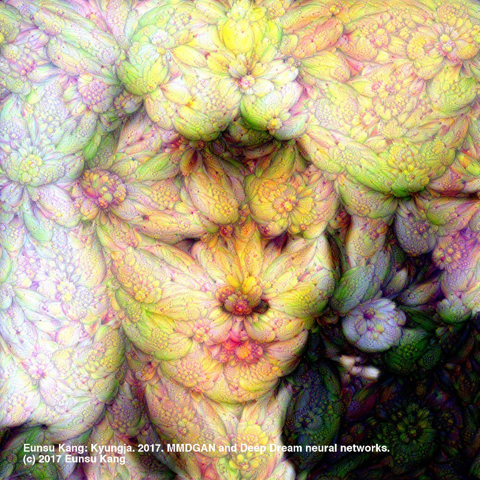 Location: Judith Rae Solomon Gallery, Bliss Hall on Wick Ave. Across the street from the Butler Institute of American Art 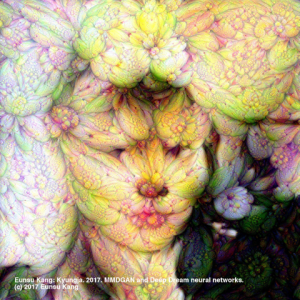 “The face is a central body region of sense and is also very central in the expression of emotion among humans and among numerous other species. The face is normally found on the anterior (frontal, rostral) surface of the head of animals or humans, although not all animals have faces. The face is crucial for human identity, and damage such as scarring or developmental deformities have effects stretching beyond those of solely physical inconvenience.”

This exhibition invites you to meet faces that are familiar yet have never existed. The co-creator of these portraits is a group of Machine Learning neural networks*. This Artificial Intelligence (A.I.) studied 200,000 human faces and then generated new faces as if a child learns what a human is from many encounters and draws an imaginary friend. The generated faces by this bias-free co-creator have been gorgeously diverse and intriguingly unique. Its own style of painting strokes and color schemes have also emerged. For this series, the artist focuses on ambiguity. The ambiguity is what makes an “artwork” art by allowing multifaceted reflection of the visitors’ gaze. Visitors are also invited to an interactive installation where they can  “weave” voices by turning an invisible spinning wheel and thus hear the interviewee’s life stories.

There is a song that my son really likes on Youtube. It is about making a monster. Weaving skeleton, arms, legs, heart, brain, and blood. Then voila! there is your new friend monster.

Once Donna Haraway remarked “Monsters signify.” Who are the monsters? They could be people who do not enjoy cucumbers, or could be immigrants, or could be humanoid robots with artificial intelligence (A.I.). The fear driven prejudice against “monsters” has been repeated at every scale of significance from the trivial to the vital in all parts of our society. Monsters are not among us but are us. Us, with our body hybridized with the internet and cell phones. Us, with our genes of mixed origins. Us, with our complex connections that can build a hypercortex (collective intelligence) such as Wikipedia.

My works try to make those “monsters” visible by creating special mirrors that reflect people’s own gaze.

Sometimes by hybridizing people into the work itself using interactive audiovisual technologies. Sometimes by weaving voices of people. Sometimes by accepting A.I. as a co-creator of art.

A.I. is in fact the most recent collaborator of mine in addition to human collaborators from various disciplines. I value the diversity of people and machines that work with me. Because I like to listen, I like to watch the organized chaos of our world, I like to learn from other people’s point of views in the process of art making and question why we live in a way we live now.

As a mirror would not have an image if there is no one looking at it, my art projects are completed only by people and metamorphosed by people’s interaction.

I invite people to see, listen, engage, and walk out with questions about why we see what we see. As if we look at ourselves in the mirror in the morning after a drunk night out and think “Who is this?”

Eunsu Kang is a media artist from Korea. She creates interactive audiovisual installations and artworks using Machine Learning methods. Creating interdisciplinary projects, her signature has been seamless integration of art disciplines and innovative techniques. Her work has been invited to numerous places around the world including Japan, China, Switzerland, Sweden, France, Germany, and the US. All nine of her past solo shows, consisting of individual or collaborative projects, were invited or awarded. She has won the Korean National Grant for Arts three times. Her researches have been presented at conferences such as ACM, ICMC and ISEA. Kang earned her Ph.D. in Digital Arts and Experimental Media from DXARTS at the University of Washington. She received an MA in Media Arts and Technology from UCSB and an MFA from the Ewha Woman’s University. She is currently an Associate Professor of New Media Art at the University of Akron in Ohio, USA. http://KangEunsu.Com